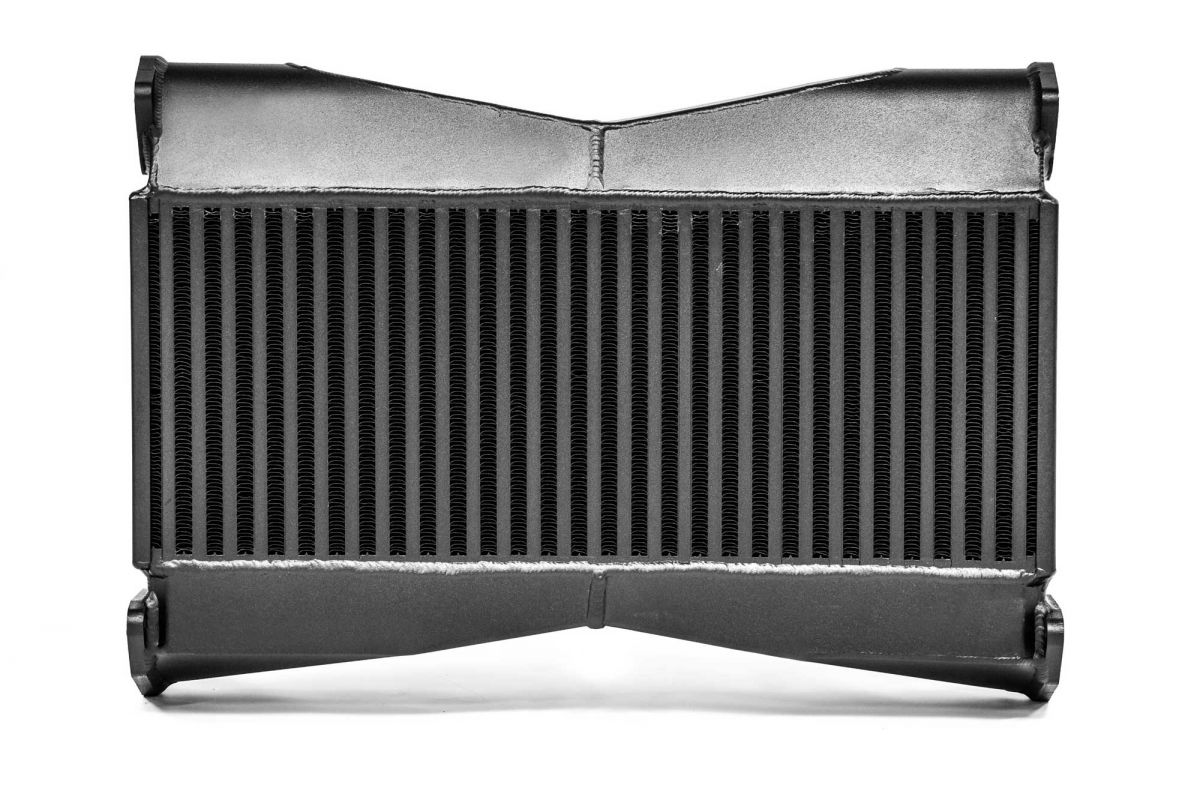 The Super Stock Intercooler is aimed at improving performance for Stage 4 and 4.5 customers who have reached the limits of the original intercooler core.


Designed to mount in the standard location the Super Stock intercooler offers higher performance in both flow and cooling capacity in a beautifully engineered and affordable package. It features a hand-built core with high flow end tanks and bespoke CNC-finished inlet and outlet flanges.

We pride ourselves on our exhaustive R&D testing and to develop this all-new intercooler we ran a rigorous series of tests between 8 different core designs.


Despite our considerable experience with intercooler design we still wanted to pit different designs against one another and, to this end, we tested ‘Bar and Plate’, ‘Tube and Fin’ and 'stuffed fin' style cores. We also used various internal fin densities to make sure we had the right combination of internal cooling and external airflow to the radiator. All were thoroughly evaluated to give us a complete set of data to draw conclusions from.


We also compared the very best and most expensive motorsport intercooler cores to ensure that the final result, although intended for road use, would be the most effective intercooler available.

It was of paramount importance that these tests were run under strict, repeatable conditions.


We used 2010 and 2013 GT-Rs, as our benchmarks, on a number of different days and ambient temperatures. Our own highly accurate and reliable twin-retarder Maha dyno would provide the test constant throughout. Both the GT-Rs used had the Litchfield Stage 4 conversions, offering an already considerable power hike over the OEM car.


Multiple runs were undertaken with the cars at a modest 1.0 bar of boost. Then the ECUs were raised to between 1.2 and 1.3 bar, allowing the turbos to run at their maximum aerobic capacity.


For each run we noted every possible variable, from before and after temperatures, through to pressures drops across the cores and all torque and bhp changes. Mapping was tightly controlled to ensure that each test run was precisely comparable to each and every subsequent dyno run with no additional assistance or changes from the engine management system.

After months of development and testing we are delighted with the end result. Whilst each of the intercoolers tested offered a gain of some sort, our final design was able to offer the greatest improvement. It raised the power output of the most powerful Stage 4 car from 650 bhp to over 680 bhp making the Litchfield Super Stock Intercooler the most effective stock location intercooler on the market.